South Africa’s property companies – both listed and private – are taking billions offshore in the face of poor economic growth locally, spiralling municipal rates and taxes, political and policy uncertainty, and issues such as construction site invasions.

Two statistics bear testimony to the surge in capital being invested offshore:

In its study published in June, Real Capital states: “The gulf between investment activity in South Africa and overseas spending by South African investors has never been greater. These players invested about four times as much internationally than was spent in their home market during 2018.” It adds: “On the back of weaker-than-expected domestic economic growth in the first quarter of 2019, it’s likely that [SA] investors will continue to explore overseas exposure … International activity [by SA investors] overtook domestic investment in 2016 and since then the gap between overseas and domestic spending has widened significantly. Domestic acquisition volume fell more than 50% between 2017 and 2018 as listed entities pulled out and became net sellers.”

According to the report, of the $4.9 billion invested offshore in 2018, over 60% was invested in retail. The balance was split nearly equally between office and industrial property. “All the cross-border investment for the year took place in Europe, with 30% focused on Poland and 17% into the UK,” it notes.

“Listed entities were the top overseas buyers last year, with Redefine [Properties], Vukile and Nepi Rockcastle topping the list. The largest deal was the purchase of a Spanish retail asset portfolio by Vukile Property Fund for €489 million from Unibail-Rodamco. The acquisition of the Riverbank House office property in Central London [for £390 million million] was the biggest single asset deal – Oxygen Asset Management purchased the property on behalf of South Africa’s Zeno Capital,” adds the report. 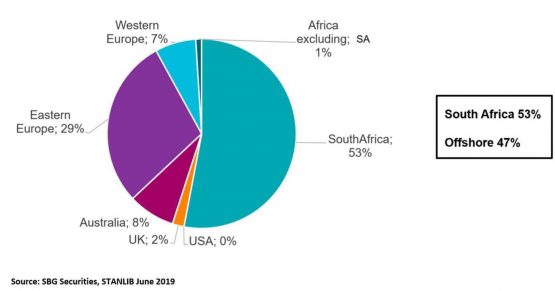 Questioned by Moneyweb, Ndlovu says SA Property Index (Sapy) companies are heavily invested in Central and Eastern Europe (CEE), with almost 30% exposure. He says Stanlib’s research shows that while the CEE market makes up the bulk of the 47% offshore exposure of Sapy companies, other offshore markets include 7% in Western Europe (countries like Spain and Germany), 8% in Australia, 2% in the UK and 1% in the rest of Africa.

Ndlovu notes that the sector’s exposure to Western Europe increased after “Vukile did well by spotting an opportunity in Spain”. However, on the UK and rest of Africa fronts, there seems to be reduced interest due to Brexit and poor liquidity in the rest of Africa, respectively. He says barring Growthpoint/Investec’s Africa fund and Grit’s expansion drive in the rest of Africa, most other SA real estate investment trusts (Reits) such as Hyprop and Attacq were looking to exit.

Despite investment into the US in the past year by local mid-cap Reit Emira Property Fund, the exposure of SA’s listed property sector to the US is still marginal at below 1%. Ndlovu believes SA’s listed property sector’s offshore exposure will top the 50% mark in the next year or two. “It’s hard to believe that the sector’s offshore exposure has grown from virtually 0% just over 10 years ago to some 47% today. But, for the first time in decades, listed property companies and funds are now delivering distribution or income growth below inflation.”

He adds: “Distribution growth has slowed down to the 2% to 3% levels. This has been largely driven by weak economic growth as well as oversupply of properties, particularly in the office and retail space. Without diversifying exposure to offshore markets, distribution growth will be a negative 3% to 4%.

“It basically reflects the current state of the South African economy.”

Garreth Elston, chief investment officer at Reitway Global, notes: “The first movers who started to look abroad during the global financial crisis period – such as Growthpoint with Goz [Growthpoint Properties Australia] and Resilient with Nepi – were very well rewarded for taking the risk of expanding into new markets during a turbulent economic time.”

He adds: “Due to the realities in the South African economy, property investors have almost been forced to go abroad to look for growth opportunities.”

“Rates and taxes have been the second fastest-growing operating cost item for property owners and investors since 2007. Adding to the sector’s woes are construction site invasions, in addition to poor service delivery, the skills deficit and building plan and rezoning delays at municipal level.

“We are not only seeing our members increasingly investing offshore, but international investors are also being put off from investing in SA, which is effectively a double whammy for our economy,” says Gopal.